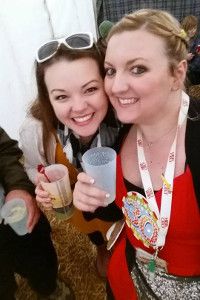 How did you get involved in the festival? I applied for a job in the box office in 2005...and have never looked back!

What makes HebCelt special? HebCelt is special for lots of reasons. I have been involved in the festival for 13 years and I have watched it grow and evolve over that time. I love the sense of community it creates, there is a real buzz around Stornoway during the week of the festival and I love that.

Best festival memory? Best festival memory is a tough one because I have so many. One of them is probably the first year I worked at the festival (2005). We had a very busy office over the week, the festival was sold out, Runrig were coming to town and the place was just crazy. After a 12-hour shift in the festival office we locked the doors and headed over to the festival site to join all the hundreds of people we had served that day - getting to the tent after that shift was amazing, realising that we had met and spoken to most of the thousands of people who stood before us, everyone was so happy and excited to hear the music, it was infectious. The tiredness of the day soon went away and we joined in the buzzy festival feeling. I always get excited on that first walk over to the site on Thursday evening.

Favourite festival gig? Why are these questions so difficult haha! Again, lots of highlights... I'd have to say Face the West on the Islands Stage a few years ago was a real highlight. The place was jumping, so much energy, it was brilliant. Eddi Reader on the mainstage was also AMAZING!