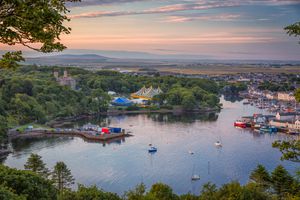 landscape of the Outer Hebrides since 1996.

This internationally renowned event has a unique setting in the Scottish Hebridean island of Lewis, the heartland of the Gaelic language and culture.

Its welcoming and friendly atmosphere reflects the ethos of the dedicated team of volunteers who have created a festival with global appeal and a strong community identity.

HebCelt passionately protects and promotes its heritage, including the vibrant Gaelic and traditional music that is both part of its history and its contemporary life. It mixes the best local talent with leading Scottish, UK and world artists and brings together household names and emerging talent to provide a feast of music to appeal to all ages.

The result is a diverse blend of sights and sounds that is true to Celtic traditions but also welcoming to new ideas and influences.

HebCelt is a cultural phenomenon for its community, it offers a sense of homecoming to those islanders returning to meet family and friends and it extends a Hebridean hand of friendship to visitors who invariably come back for more.

During the pandemic years, the HebCelt team had to adopt a different approach presenting content that epresented the ethos of the event, promoting our diverse local talent and maintaining engagement with our loyal global audience.

Seisean HebCelt was produced in July 2020 and the team delivered Survival Sessions, a hybrid programme (live and digital) during 14-17 July 2021.

The Trust came back with a bang for HebCelt in July 2022.

The festival has achieved many accolades over the years including: