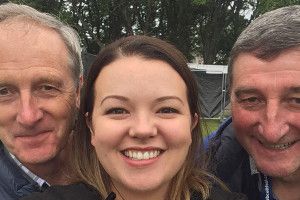 Festival role I look after the accreditation and am an associate director.

How did you get involved in the festival? I don't think I've ever not been involved! My Dad, Murdo, was involved from the start of HebCelt so HebCelt has been a part of my life for as long as I can remember! Over the years I've done a number of roles from litter picking, a runner, family events, box office and my role now looking after the accreditation for the arena.

What makes HebCelt special? The people. The volunteers who run it are the most dedicated folk- absolute super humans! The festival crowd are so warm and friendly, it's a really special festival to be at. Folk from all walks of life come together to enjoy the music, it's a beautiful thing!

Best festival memory? So many to choose from!! A few that stand out are:

Favourite festival gig? I can't choose one so my top 5 in no particular order would be: La Bouttine Souriante, Dougie MacLean- in particular his behind the song concert, Imelda May, Seth Lakeman and Julie Fowlis.