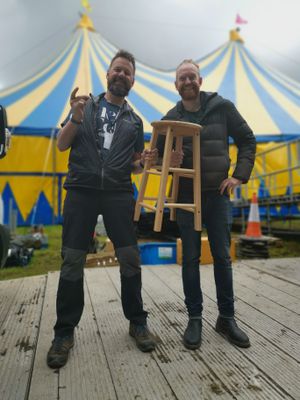 How did you get involved in the festival?  My wife Jane has been a festival volunteer for nearly 20 years and she encouraged me to get involved .

What makes HebCelt special?  The continued success of the HebCelt Festival is brought about in no small part through a combined community effort which has managed to develop this local event into a world-class, artistic festival. One of the things that makes HebCelt so special is the great sense of pride and ownership within the local community regarding the festival. It's a voluntary-run, non-profit event and the amount of in-kind assistance that's willingly provided each year is truly humbling.

Best festival memory?  It's difficult to pick a specific moment as I have so many great memories from HebCelt but for me, the best memory is the continued sense of community that the event delivers each year. HebCelt is a fantastic homecoming occasion for so many expatriated islanders and I think it really adds to the experience for everyone who attends. It's great to see so many people enjoying the event with their families and meeting up with friends that they've not seen for such a long period of time. You can really feel the positive atmosphere within the Festival arena.

Favourite festival gig?  My best festival gig was probably Runrig's performance in 2016. It was widely accepted that this would be their last ever appearance in the Outer Hebrides and there seemed to be tremendous mutual-appreciation between the band and the crowd throughout. The atmosphere was very special indeed.