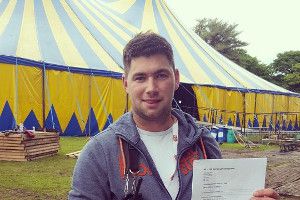 How did you get involved in the festival?: I got involved in my first festival back in 2002 when I was a volunteer steward. I then moved onto the local security, before becoming site manager in 2015.

What makes HebCelt special?: HebCelt is special because of the team behind it. Well, it's more like a family, with everybody pulling together to make it happen. Plus the fact that it generates so much for the local economy.