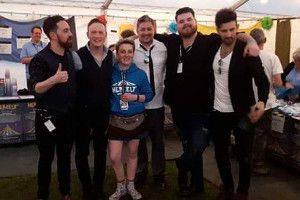 What makes HebCelt special?: The feeling of the festival - we're one big family, and it's always got that family-feel, even if the rain is pouring down and the wind is attempting to lift the tents! Of course when the sun is out it's 10x more special!

Best festival memory?: Far too many! But a few years ago, I sold Dougie Maclean a unicycle, on the promise he wouldn't attempt to ride it before his set! It was most definitely a 'What just happened?' moment.

Favourite festival gig?: I definitely struggle to pick a favourite for each year, let alone since 2013. Some of my favourites however have included Runrig, Tidelines, Imelda May and Julie Fowlis.