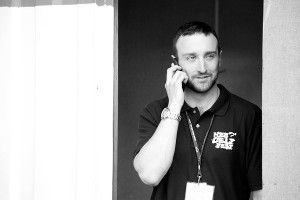 How did you get involved in the festival? My festival journey started in 2001 when, at the tender age of 16, I volunteered for the tech team and helped put together some equipment at the then Studio Na h-Alba. I had such an amazing time with everyone that I've kept coming back since.

Best festival memory Have Mercy Las Vegas playing the Cala lates in 2015 tops it for me. It was closing time, the PA was turned off and the band played a couple of blinding acoustic tunes in the middle of the dance floor surrounded by the backstage crew and some punters who had stayed behind. For the very last tune (probably the third time it had been 'one last tune...'), we all ended up lying on the floor with the band still playing away and loving it.