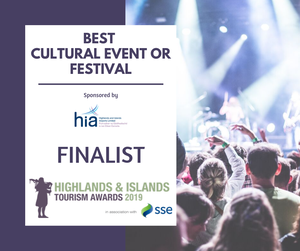 One of Scotland’s most popular music festivals has been shortlisted for a major tourism award as it starts preparations for its 25th anniversary.

The internationally-renowned Hebridean Celtic Festival has been named today as a finalist in the Best Cultural Event category in the annual Highlands and Islands Tourism Awards (HITA).

HebCelt picked up the title in 2014 and 2017 and last year won the national category at the Scottish Thistle Awards.

The 2019 Hebridean Celtic Festival, held from 17-20 July in Lewis and Harris, was praised by artists, audience and supporters as one of the best ever.

More than 30 acts, including headliners KT Tunstall, Tide Lines and The Shires, took to the stage over four days with attendances reaching 18,000.

Festival director Caroline MacLennan said: “We are thrilled to be shortlisted for a HITA award again in a competition where we have been successful previously.

“HebCelt is a major force for the islands economically, culturally, socially and environmentally and it is always pleasing that the hard work of the mainly volunteer effort to stage the event is recognised.”

An independent economic assessment of HebCelt showed that more than half (56 per cent) of its audience comes from outside Lewis and Harris, including from Europe, the US, Canada, Australia and New Zealand. About 70 per cent of these are returning visitors, underlining the festival’s importance to tourism.

Overall, HebCelt directly generates net income of around £2 million annually and has now brought in about £30 million since it began.

HebCelt is renowned for promoting traditional music and the indigenous Gaelic language and culture as well as being champions of environmental and gender equality causes.