Loganair and HebCelt take to the air 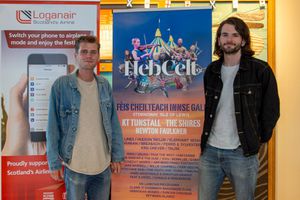 HebCelt has once again teamed up with Loganair to help ensure one of the festival’s main acts makes it to the stage on time.

The airline has had a long-running association with the award-winning festival and this year as part of its sponsorship flew members of Hudson Taylor from Dublin to Stornoway ahead of appearing on Saturday.

Hudson Taylor include brothers Harry and Alfie Hudson-Taylor who have been growing their fanbase out of Ireland and have recently completed a US tour, a sold-out, six-night show in Dublin and supported Hozier on the American leg of his 2018 tour.

HebCelt director Caroline Maclennan said: “We are extremely grateful to Loganair for their ongoing support for the festival. As an event run almost entirely by volunteer effort, we rely on the help and generosity of our sponsors to ensure we can attract the highest quality acts to the Hebrides.”

Sam Talbot, marketing manager at Loganair said: “HebCelt is a flagship international event for the Hebrides and we are delighted to support festival as part of our long running commitment to the communities across the Highlands and Islands.”