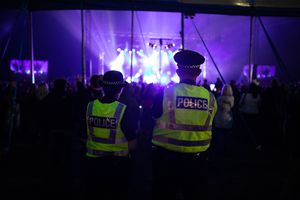 A squad of 22 members of the Police Scotland Youth Volunteers (PSYV) joined adult volunteers at the festival this year. For the first time youngsters from Moray and Shetland joined those from the Hebrides at a major event.

The PSYV programme is open to young people aged 13-18 who volunteer at community and national events across Scotland. Supported by adult volunteers and led by a police constable, the programme aims to strengthen the relationship between the police and young people, breaking down barriers and promoting positive role models.

Those on duty at HebCelt included 13 youth volunteers and five adults from the Outer Hebrides, six youths and two adults from Moray and three young people from Shetland. Their activities included guiding festival-goers around the site and handing out festival and general police safety advice.

PC Rick Henderson, who led the group, said: “PSYV has been working successfully in the Hebrides for two years and this is the first time we have invited young people from other areas to join us.

“It was a great opportunity for this group of young people to help out at one of Scotland’s biggest music festivals and learn more about policing in a family-friendly atmosphere. We hope PSYV volunteers will be a regular fixture at the festival in future.”

Festival director Caroline Maclennan said: “The PSYV youngsters were a very welcome addition to our volunteer squads. Their presence helped us a great deal and we hope they enjoyed the experience and learned some new skills along the way.”

The 24th HebCelt opened on Wednesday and ran until Saturday. More than 30 acts, including headliners KT Tunstall, The Shires and Tide Lines performed in the main arena and other venues in Stornoway and across Lewis and Harris.