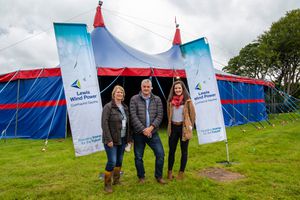 HebCelt and Lewis Wind Power completed a ‘high five’ this year with a successful sponsorship deal.

The developer of the Stornoway Wind Farm has supported the festival’s Islands Stage now for a fifth successive year.

The partnership fits with HebCelt’s environmentally-friendly policies which has also seen it taking pioneering action to cut the use of plastics and reduce waste.

This year’s Islands Stage features an exciting and diverse line-up of artists from different parts of the UK.

The Benedict Morris Trio, featuring this year’s BBC Radio Scotland Young Traditional Musician of the Year, will be first on stage on Friday. Fiddle player Benedict secured a HebCelt invitation after winning a competition at this year’s Celtic Connections.

FARA, which brings together four exceptional young musicians from Orkney, are next up, followed by The Kris Drever Trio, featuring the renowned singer songwriter who has also enjoyed success as a solo artist and as part of folk band Lau.

Starting Saturday’s programme will be Jamie MacDonald & Christian Gamauf and they will be followed by Jake Morrell, from Norfolk; Glasgow-based roots outfit Awkward Family Portraits; Hands Up For Trad, Battle of the Folk Bands 2018 winners Eabhal, from South Uist; and folk band Talisk.