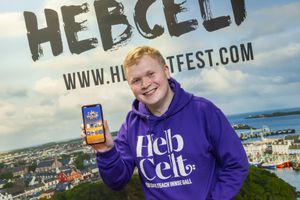 Music lovers heading to the Hebridean Celtic Festival will have all the information they need at their fingertips by using new phone apps this year.

The iPhone and Android apps provide dates, times and venues for every concert during the four-day festival which runs from 17-20 July in Lewis and Harris.

Their development, which was supported with funding from Highlands and Islands Enterprise, was a labour of love for Sam Jones who has a long association with HebCelt and is the son of the festival’s finance director, Martin Jones.

He has been helping at the festival since the age of eight, first in the tuck shop at the childrens’ event and later as part of the teams who assist with stewarding, site preparation and in the bars.

He completed the Android app last year as the final part of his computing degree with the Open University and this year worked on converting for use on Apple iPhone. Sam said: “The app is essentially a digital version of the festival brochure; users can see all the information about the different artists, where they are playing and when. There's also information about the various fringe events surrounding the festival and they can save their favourites to create a personalised schedule, as well as a map to help find their way to the different venues.”

HebCelt director Caroline Maclennan said: “Having this technology available is going to be a great addition to our promotional tools to help keep our audience informed bout the festival.

“We are extremely grateful to Sam for developing these apps and to HIE for supporting the project. I think this initiative demonstrates the path to progression that many young people have taken through their involvement with the festival. Sam is of course very much invested in HebCelt, but we hope that his skills and expertise could be of use to other festivals out there."

Bill McMillan, Head of Business Growth at HIE in the Outer Hebrides, said: “We are delighted to award HebCelt with funding to develop this excellent app which will help drive sales and enhance the festival experience.

“Sam’s expertise has been valuable and it’s great to see that this new app will be available at the festival this year which will appeal to the large audience that comes from all over the world.

“We continue to assist HebCelt to ensure the positive economic impact it has in the Outer Hebrides.”