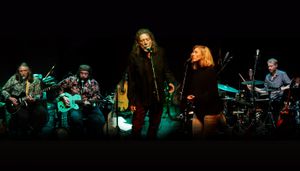 The acoustic cooperative, which also includes Oli Jefferson (percussion), Tony Kelsey (mandolin, baritone and acoustic guitars) and Matt Worley (banjo, acoustic and baritone guitars, and cuatro), played their first public gig just over a year ago and have since played to small audiences at theatres and festivals around the UK.

Their sound has been described as bluesy and folk-inspired, which packs a punch ranging ‘from a whisper to a scream’.

Best known as the lead singer and lyricist of Led Zeppelin, one of the most successful and influential bands in rock history, Plant is regarded as one of the greatest vocalists of all time.

He said of performing at HebCelt: “I have a deep and charged connection with those faraway islands and look forward to returning to the beautiful machair and to bring a different slant to my longstanding game." Saving Grace will join Texas, Seasick Steve, Tide Lines and Julie Fowlis as some of the star names on the bill for the milestone festival.

HebCelt director Caroline Maclennan said: “Our 25th anniversary festival is a very special occasion and the programme reflects that.

“Robert Plant is a legendary name in the music scene and it is so exciting that he and the other highly accomplished musicians in Saving Grace will be joining us for such a significant event.”

The 25th anniversary HebCelt will be held from 15-18 July in Lewis and Harris.

Colin Macleod, who shares the same international booking agent with Robert Plant, last appeared at HebCelt in 2018, following the release of his debut album ‘Bloodlines’ and ahead of a performance at BluesFest alongside Plant and Van Morrison.

Mischa Macpherson, a winner of the BBC Radio 2 Young Folk Award and MG Alba Scots Trad Music Award for Gaelic Singer of the Year, has performed around the world from an early age. She is also highly regarded as a songwriter and collaborator and last year was nominated for Composer of the Year at the Trad awards.

Sean Harrison & Band are a four-piece from the Outer Hebrides, comprising Sean and his brother Andrew Harrison, Jason Laing and Chris Ferguson. The band will release their new album ‘Years of Young Innocence’ on 17 July, the same day as they appear on the HebCelt stage.

Welsh indie-roots band Rusty Shackle have built up a devoted fanbase with their captivating live shows. They have released three albums over the last few years, each reaching the Top 3 in the iTunes ‘Alternative Folk/Singer Songwriter’ charts.

Glasgow-based INYAL, who were nominated for the Belhaven Bursary for Innovation at the MG Alba Scots Trad Music Awards, combine electronics and twisted beats with intricate fiddle and pipes and the Gaelic song of Radio 2 Young Folk Award winner, Josie Duncan.

A trio nurtured at Lews Castle College UHI’s Uist campus, Hecla have performed at a number of festivals including HebCelt and the Festival Interceltique Lorient. They were nominated Up and Coming Artist of the Year at MG Alba Scots Trad Music Awards 2019.

Scottish fiddler Ryan Young, the Young Scots Trad Music Awards Up and Coming artist of the Year in 2016, has twice been a finalist in the BBC Radio 2 Young Folk Awards. With guitarist Jenn Butterworth, he played the world famous WOMEX Expo, in Finland last year and began recording a new album.

Glasgow-based Scott C. Park, who grew up in Lewis. Over the last few years he has played lead guitar with other Hebridean artists including Astrid and One Big Fuse, and also featured on the Late Late Show in Los Angeles alongside Colin Macleod. He released his debut solo single ‘Blind Eye’ in December.

Scottish singer songwriter Nicky Murray has been writing and recording music for around eight years. He released his debut album ‘Plenty More Weeping' in 2014 and has toured with a wide range of artists including Martin Stephenson, JJ Gilmour, Elephant Sessions, Peatbog Faeries and Duncan Chisholm.

James Nicol is a seasoned singer-songwriter from Glasgow. 2019 was his first major song release which saw great success in 28 countries which has allowed James to build a loyal following.